This is what my sleep pattern looks like the day after food poisoning. 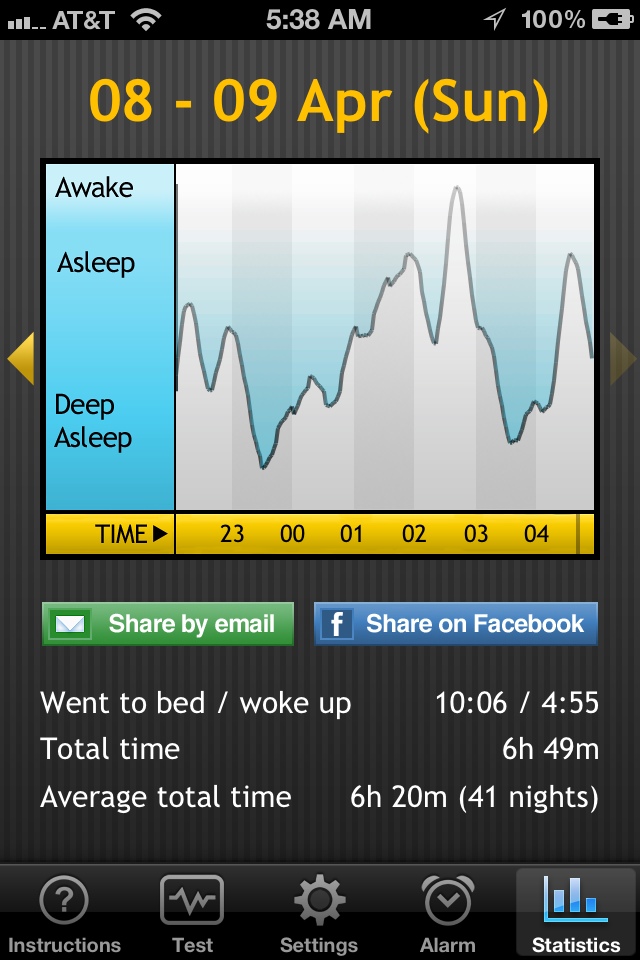 That’s all I got this morning. Still kind of in a ‘I don’t wanna do anything’ mood.

Fading fast from memory, but my dream last night came out of nowhere.

I was in some place like France, at some kind of cavern/Victorian era natural history museum, with offices next to the Louvre or something. And I was there doing some type of da Vinci code bullshit with this random spy woman I’ve never met, on contract by Death itself. Had to run through this cave and trip alarms and pick up some kind of deed. Get split up from the chick, end up on the street where Death is waiting in a car, sitting next to him is whatever the fuck this thing in panel 7 is.

Deliver the deed, death speeds off, and that’s the end.

What could it mean?

Anyway, here’s the sleep chart, maybe somebody can put 2 and 2 together.

So I’ve noticed that I appear to only dream when I get less sleep than I probably need.

Looking at the chart though, doesn’t seem like I missed all that much…

I neglect to mention, though, that I didn’t really get out of bed until closer to 6. I was sort of half asleep, checking the tweets. Pushing it as far as I can. Lucky for me, the traffic this morning was kind of a breeze, and I made it to San Mateo at about the same time I usually do, even though I left 30 minutes late. It’s probably gonna suck tonight…

I did have a dream. I’m not sure what to make of it, especially as the details fade, but here goes. I was walking down a street, and I found myself in some kind of health clinic. It kind of had a 1970s public institution vibe. Kind of what I imagine a methadone clinic to look like. Not exactly a great place. I go in there, and there’s some kind of gathering of people. Regular, working-class people. Not really attractive people. They’re all just sitting there, filling this makeshift public forum/waiting room type place. It feels like they’re waiting for some kind of union meeting to start, but nobody who’s supposed to talk has shown up yet. All these people waiting make me forget what I went in there for. For some reason, I take out an iPad, of all things, and start filming the defeated looking faces of this group. After making a 360 degree pan with the iPad, I turn around and leave. As I’m about to exit the building, an asian woman in her 30s comes up and asks me where the DMV is.

And that’s the dream. It’s kinda weird, no?

So anyway, later on I’m going to upload a new radio show to mixcloud, and share it here. Hopefully sometime tonight I’ll actually upload it to the KECG server and it’ll broadcast over the air this weekend.

Remember when I used to talk about my sleep? Well that’s back.

So I’ve been averaging less than 7 hours of sleep every night…maybe that’s not a big deal.

I’m pretty sure I did dream last night, but nothing memorable. The other night I was embarrassed to realize I was dreaming about work. That’s the last thing I want to do. I give those people enough of my time. Gives me an idea, though, for when I finally get sent to the official training–I’ll blog about it. If anyone ever wondered what it’s like to work for the DMV, I’ll let you know, but who knows when they’ll actually send me to training…

As for last night, my sleep was cut a little bit short for two reasons. Both relate to me being a little excited.

Firstly, at ~3 am PST, the Seattle Mariners and the Oakland Athletics officially started the 2012 season of Major League Baseball. I didn’t quite make it for the opening pitch, but I did wake up early enough to catch the 6-12th innings. I almost wish I didn’t, though. It was a bit of a disappointing game. Stellar performances from Brandon McCarthy and King Felix, but the A’s couldn’t produce runs when they needed to, and were defeated in the 12th inning. Ichiro had a great night. Or morning. Or however you want to look at it. They do it again tomorrow, this time starting an hour earlier (closer to 2 am). Not sure if I’ll wake up early enough for that one, however, because tonight…

The Legend of Zelda 25th Anniversary concert comes to San Francisco! I’ve been looking forward to this since they first announced it, and the day is finally here. I brought my camera, hoping to make a video review to share on this website (some day). I also plan to make a new radio show in the next two days based on music from The Legend of Zelda.

And I haven’t forgotten the movie reviews. The Lorax and Metropolis are almost done, I would have posted yesterday but I felt like adding pictures to break up the text. Just gotta do that and those’ll be ready. Then on to John Carter and Casa de mi Padre.

So a lot on my plate today and the rest of the week. Let’s see how many of these goals I can tackle fully in this compressed time/sleep deprived week.

Had a dream last night that somehow wrapped itself up. Isn’t it always fun when your dreams do that? It’s almost like they’re planned out.

I dreamt I was hired by some kind of graphic design company. They had a fancy new office and everything. So I get hired, and literally the second I sit down to work I get a call from a bank or something that wants to hire me too (for more money, etc., or something). So I close the one file I opened, some bad looking graphic that needed work, and leave to do this other thing.

Bunch of other stuff happens, but just before I wake up, I’m driving down the road and I see a billboard with that graphic I didn’t have time to work on. And it’s a super ugly billboard. And this woke me up because I thought, ‘I could have made that billboard good, but I quit on them.’

I’m not sure what it all means…

Anyway, talking about Arrietty yesterday, and how I didn’t really read books when I was a kid, brings up something I’d like to discuss.

I follow LeVar Burton on twitter, I’m not 100% sure why. Maybe it’s an effort to follow as many cast members of Star Trek: The Next Generation as I can. But there’s only like 2 left, I even unfollowed Wil Wheaton, ‘cuz that guy got on my nerves. So it’s really down to LeVar and Brent Spinner, or Geordi and Data. However, Geordi is not who I associate LeVar Burton with primarily. For some people, Geordi is first and foremost Kunta Kinte.

But not me. I haven’t even seen Roots. I know him primarily from Reading Rainbow.

As a kid, even though we had illegal cable, I still found myself watching a lot of stuff on PBS. I watched Jack Horkheimer – Stargazer, I watched Bill Nye, I watched Carmen Sandiego, and I watched Mr. Rogers. Interestingly, I didn’t watch Sesame Street, it was just never my show. But I did watch Reading Rainbow.

The Reading Rainbow wiki page says that the show ‘encouraged reading among children.’ It did not have that effect on me. I liked the show for the portions where LeVar would go places and show things. I used to hate it when he would say “but you don’t have to take my word for it” because that means 5 minutes of stupid kids talking about stupid books. They’re always crappy kids books, which might be a redundant phrase. Of course, even if it was interesting, after listening to these kids talk about the books they read, I had no reason to actually read those books myself. So while the show was designed to promote reading and literacy, it had the opposite effect for me.

When I think back on it, though, I can’t remember reading one good book in my whole childhood. Not until like 10th grade did they assign a book that was actually entertaining, and even then half the books were still total shit.

Reading Rainbow likes to make it sound like reading helps the imagination, but for me it always seems to hinder the imagination. I mean, they’re telling you what to imagine, writing it out in detail. A real good imagination flourishes with no guidance. TV isn’t any better, but at least TV has pictures and music and a set length of time.